Eleven courses. Sounds like a lot doesn’t it? But really, it was the perfect amount.

Kappo, a restaurant style where food served to guests seated in the kitchen, recently hosted a series of pop-up dinners with different themes. The final June dinner before their grand opening at East End Market last week echoed the theme of “mottainai” or regret of being wasteful.

Chef Mark, Chef Lo, and Pastry Chef Jennifer as well as Josh used the bits of fish, pork, and vegetables that are usually left on the cutting board to flavor stocks or served them in another interesting ways. Each time a dish was served, prep for the next dish was underway. The sweet, sweet suspense!

Like kaiseki, the dinner started with a sweet wine followed by a braised course or nimono like Kappo’s Braised Turnip in Turnip Miso Sauce. The turnip had a mild flavor with a dash of savory-sweet from with miso (fermented soy beans with salt and fungus). Gotta love miso! The sesame seeds rounded out the dish with slight crunch and texture.

The second course or hassun — one of my favorites — was served on a round plate over a triangular fresh squash leaf from the East End Market garden that echoed shapes found in Buddhism.

The little saucers included crispy Fried Chicken Gizzards in a Cucumber Sauce (which I needed to sip out of the saucer, it was that good), Seared Salmon Belly topped with roe and tosazu sauce , and Hirouso with Carrot, Kikurage Mushrooms, and Tofu. The tofu was a light, puffy surprise of a bite that I could have easily had 5 more of without batting an eyelash.

Kappo plans on highlighting a different noodle each week at their new East End Market counter like this Ramen Somen. The broth was layered with flavor from pork neckbones, trotters, veggies, and other tasty bits that call back to any grandmother’s old school stew. Toppings included an onsen egg slowly boiled in a hot water bath, nori (dried seaweed), and spring onions with pickled ginger. 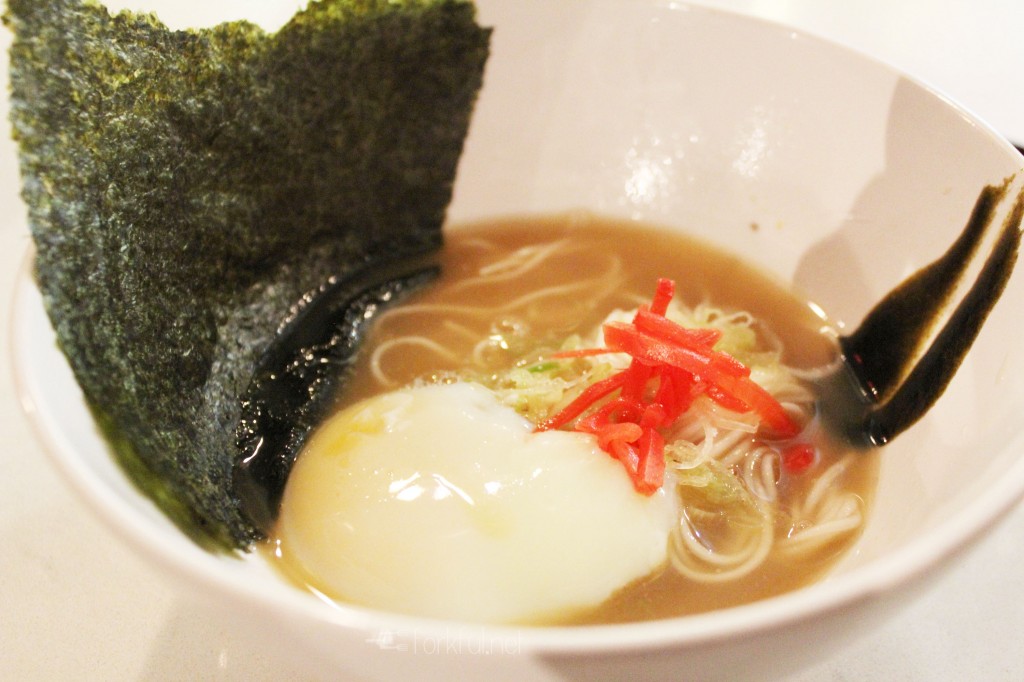 Next was a little palate cleanser in the form of fresh Tofu Salad with fried leeks, baby arugula, ginger, and spring onions. What followed was one of my favorites — Botan Ebi in Tomato Jelly, Pickled Cucumber, and Kimizu sauce. The plump shrimp basically dissolved in my mouth with a touch of sweet from the tomato jelly, but not as much sweetness as I expected. There was sweet, there was tangy — I wish I had more things to dip in that tomato jelly!

Mr. Forkful loved the toasted Cauliflower Steak with a light Cauliflower Sauce and thinly sliced Pine Nuts. A tangy twist from the pickled cauliflower, which turned beautiful dark lavender from the pickling brine, balanced out the dish. The Grilled Vegetables included peppers and mild enoki mushrooms.

The dishes throughout the meal varied from strong to light to keep the flavors fresh, so our palates were primed for the rich Japanese Bloodcake with Quail Egg. In addition to training in Japan, all Kappo chefs trained in London where blood sausages is tradition on a plate. This little plate of fluffy bloodcake was a new turn on an old favorite with a lá Fergus Henderson of St. John, whose legacy includes embracing nose-to-tail cuisine. 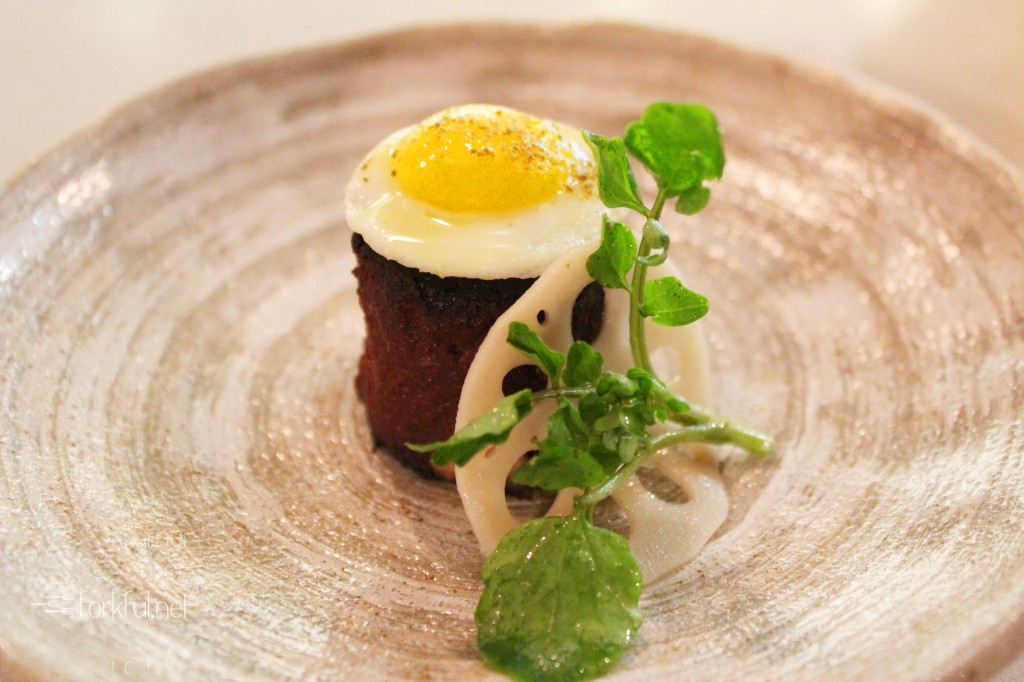 The rice course traditional brings the meal to a close and is supposed to open guests’ appetite to the sweet courses. Our bowls showcased a seasonal Asparagus Rice, Pickled Ginger, and Asparagus Tips and Stem topped Crab Sauce and Sweet Shishito Peppers.

The pre-dessert was a citrusy Yuzu Sorbet followed by seasonal Berry Dessert with Yogurt Foam and a Berry Compote. As a thank you, Chef Jennifer gave us all a trio of her neatly wrapped soy bean cookies and a copy of the dinner menu to take home. Love!

She also hinted at featuring seasonal Japanese sweets from week-to-week in addition to the fresh sushi and ramen menu. Parfaits and house-made pickles could also be on the list. Stay tuned! Until then, drop by and say hi to the chefs at Kappo as they prep seasonal Japanese fare for lunch. You can also find out about any upcoming pop-up dinners ($75 per person), which may include 11 courses with wine and sake pairings.