Japan is a thunderclap of pure, distilled Amazing.

The sights, sounds, and people leave me stunned and amazed every time. Tokyo is New York City to the nth power, but spotless and filled with the nicest, most respectful people I have ever met. I try to look beyond the city limits from floor-to-ceiling windows in New York Bar at the Park Hyatt Tokyo or Tokyo City View in Roppongi Hills, but the city seemed to inception in on itself the farther I looked. The sheer amount of things to see and do can seem overwhelming, but below are a few things I learned that helped wrap my head around the whole experience. 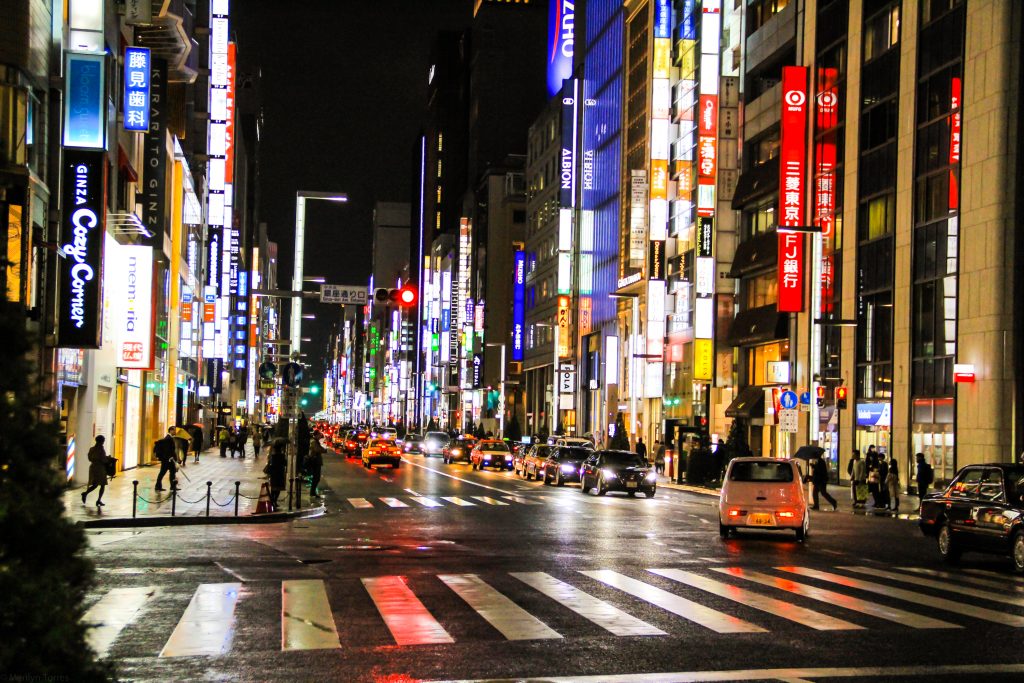 Mr. Forkful and I rented an affordable hotel room—we weren’t going to be in there much anyway because there was so much to see and do! But we made sure to see a view of the city while we were in town. We didn’t just pay for a view, we paid for an experience. Our first time around, we snagged a cocktail (2,180 JPY including tax and gratuity) at the New York Bar in the Park Hyatt Tokyo before 8:00 p.m. and take in the view to avoid the 2,400 JPY cover charge after 8:00 p.m. Our Lost in Translation whim was complete. (On the other hand, the cocktail of the same name was too sweet, but it was worth the view.) 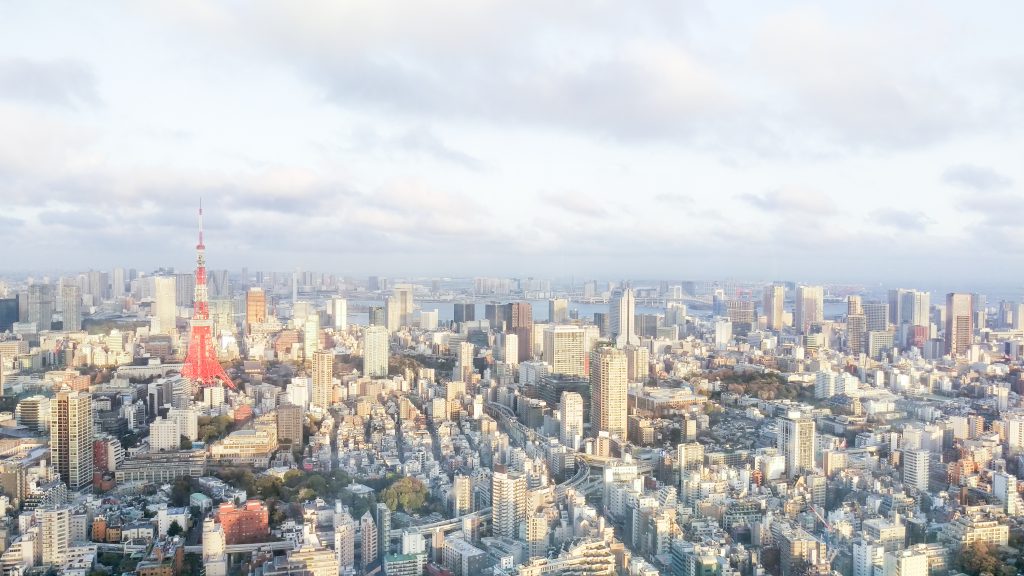 We avoided the crowds at Tokyo SkyTree. Instead, we strolled through the latest special exhibit in Tokyo City View (1,500 JPY-1,800 JPY) on the 52nd of Mori Tower in Roppongi Hills and walked around inside the 360-degree outer gallery for an unforgettable view without all the wind of an open deck. Past exhibits include the 25th anniversary Sailor Moon celebration, and the current exhibit was Marvel: Age of Heroes, which covers a history of all things Marvel Comics and Marvel Studios with rare comics and movie props. 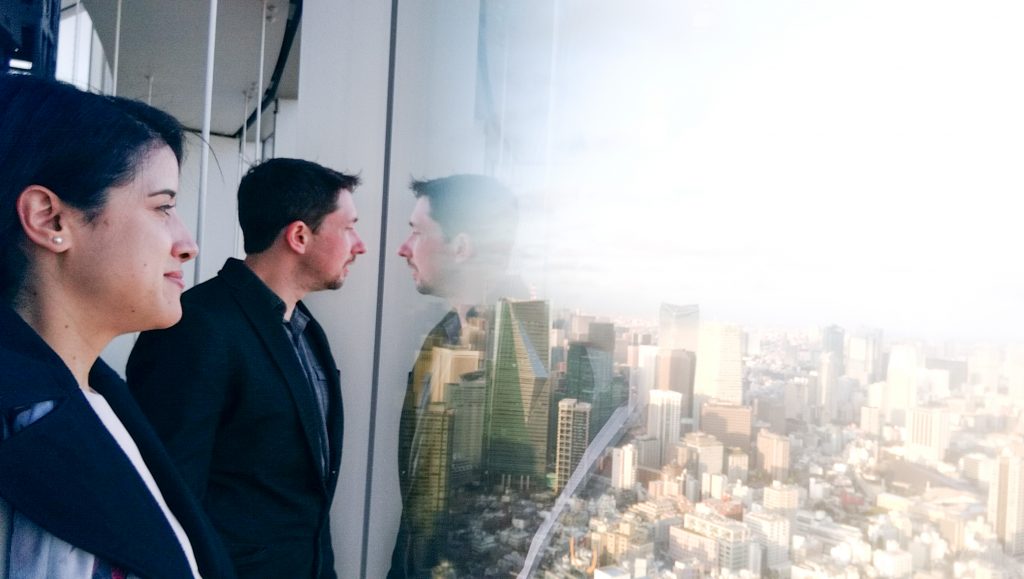 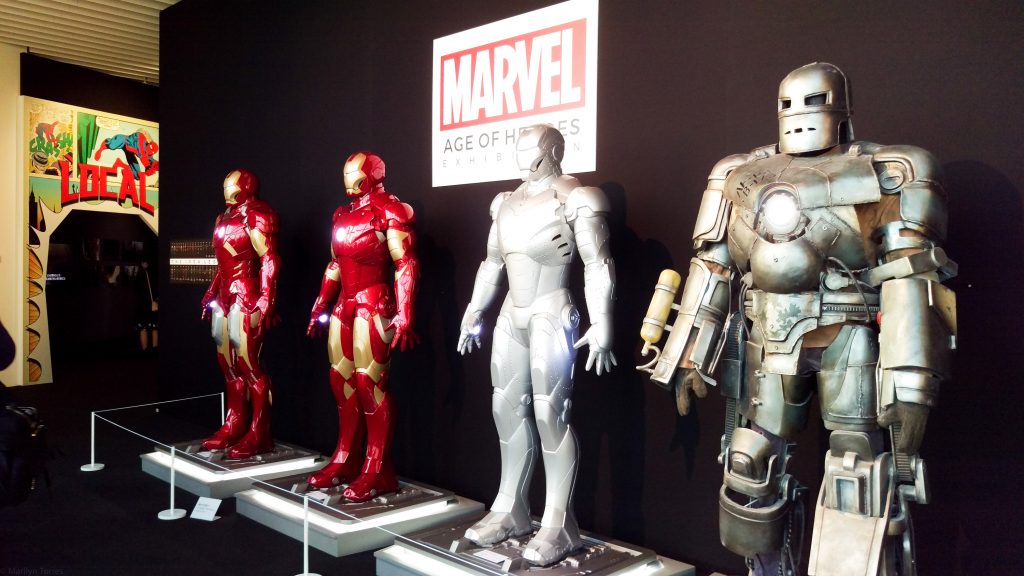 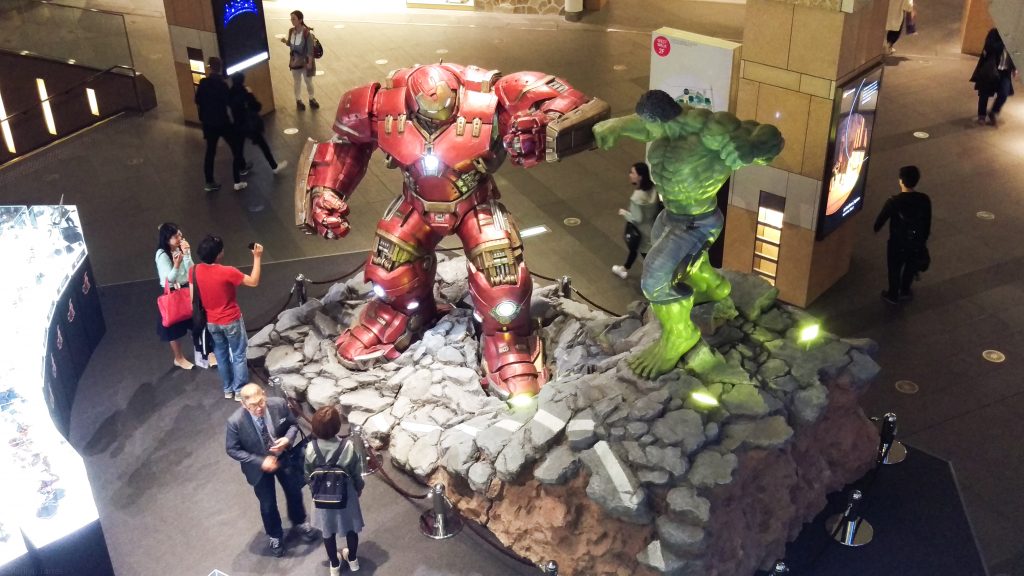 Late March and early April are the tail-end of low season and a prime time to see sakura (cherry blossoms), so my husband and I had to take a second chance to see the sakura at peak bloom one more time. Tokyo is a busy city anyway (understatement!), so I can’t imagine the crowds during Golden Week (festival week, 29 April through 5 May) or summer.

The flower passion in Japan is awe-inspiring. We’ve seen a forecaster on the morning news whose specialty was communicating when flowers are expected to bloom across Japan. Google Maps even has sakura bloom indicator with information of which parks are in full bloom during sakura season.

Protip: Check the  Instagram “#cherryblossom” hashtag to quickly spot which blossoms are in bloom in any part of the city.

We couldn’t forget to hanami. Picnicing under sakura blossoms around town is a must. Whole businesses reserve areas for their employees to hanami with a tons of food, sake, and beer. Buy a mutli-dish bento at a train station or 7-Eleven—konbinis (convenience stores) actually have great quality food—get a small blanket or tarp at the Don Quijote and savor a meal under the blossoms. Don’t forget to BYOB because drinking under the blossoms is legal. 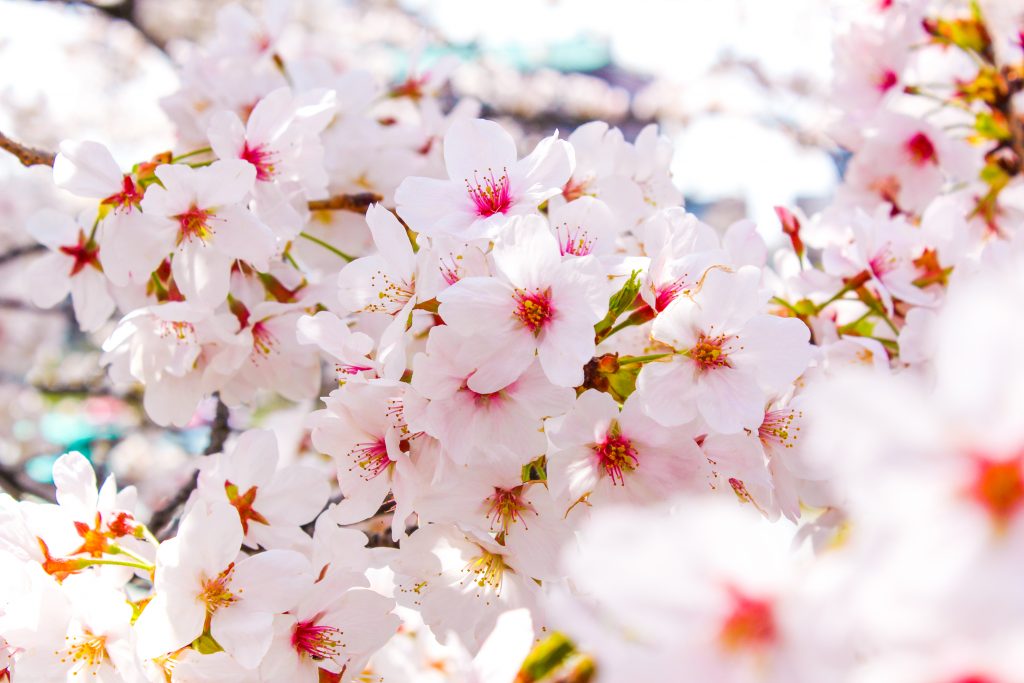 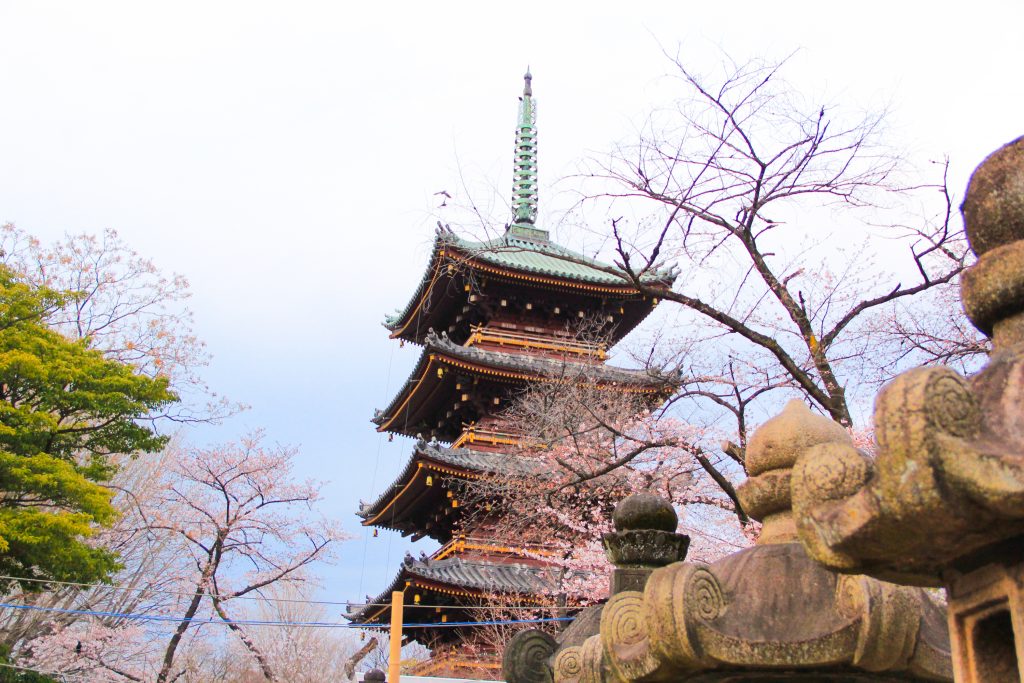 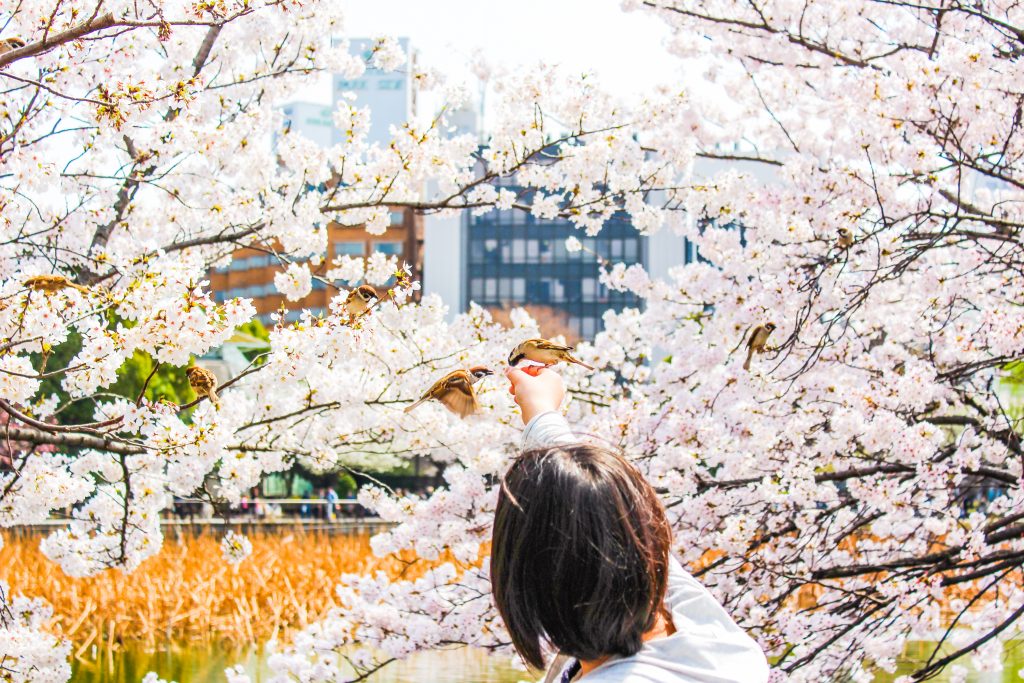 Ueno Park is the most popular, but also the most crowded park to see blossoms. Our best bet for a lower key hanami was to see the blossoms along the canals in Meguro-ku or around the north side of the Imperial Palace complex. The crowds were thinner and we could actually pause and soak in the moment without getting jostled by other tourists.

That said, Ueno Park did have a ton of amazing food stalls up the long walkways leading up to the Bentendo Temple. Grilled mackerel and squid, mochi (rice balls), chocolate-covered bananas on a stick—the variety was mind-bloggling. The crowds also thinned around Shonibazu Pond behind Bentendo Temple near the end of the day, the shores were lined with sakura trees, and the pond was dotted with people in swan boats. Ueno Park was still stunning sakura-viewing option, albeit busier than Meguro-ku or the Imperial Palace.

Attempt to Eat All the Things

After a combined 24 days over 2 trips, I can safely say eating bad food in Japan is nearly impossible. Sure, I’ve come across things that just aren’t my taste. I’ve eaten natto (fermented soy beans) for breakfast about 5 times before accepting that if I stirred too much or didn’t add enough spicy mustard or soy sauce, I can’t handle the bitterness. But I try everything because I have no idea when I’ll be lucky enough to return to Japan.

At Hotel Unizo Ginza, I was 3 days into our stay before I realized the mysterious, translucent white salad with ponzu sweet vinegar I looked forward to eating every morning was squid. Ha! As a Puerto Rican, ceviche makes my heart sing so of course the squid salad was right down my alley.

I’m also already suffering Japanese pickle withdrawal—they’re so good. And a staple with every meal. The pickles can be daikon, cucumbers, eggplant—you name it—as well as sweet, salty, or tarte. Umeboshi (pickled plum) is one of my favorites, although I learned the hard way that tiny bites are the way to go. Putting a large umeboshi in your mouth borders on Fear Factor levels of sour.

Tsukiji Fishmarket is also a must, but ruins me for all other sushi and sashimi for a while. There’s few things like starting the day with a chaotic tour of one of the world’s busiest fishmarkets in the world followed by breakfast at Sushi-dokoro Okame in Tsukiji Fish Market—the uni nigiri, ikura, and toro sashimi still stand out as a few of the most freshest, vibrant things I’ve ever eaten. (Check out a detailed map of all the sushi stalls at Tenkai-Japan.com.)

Side note: The market is supposed to move to a newly built venue in Toyosu due to the Tokyo 2020 Olympics, although the move was delayed until Winter 2017/2018. 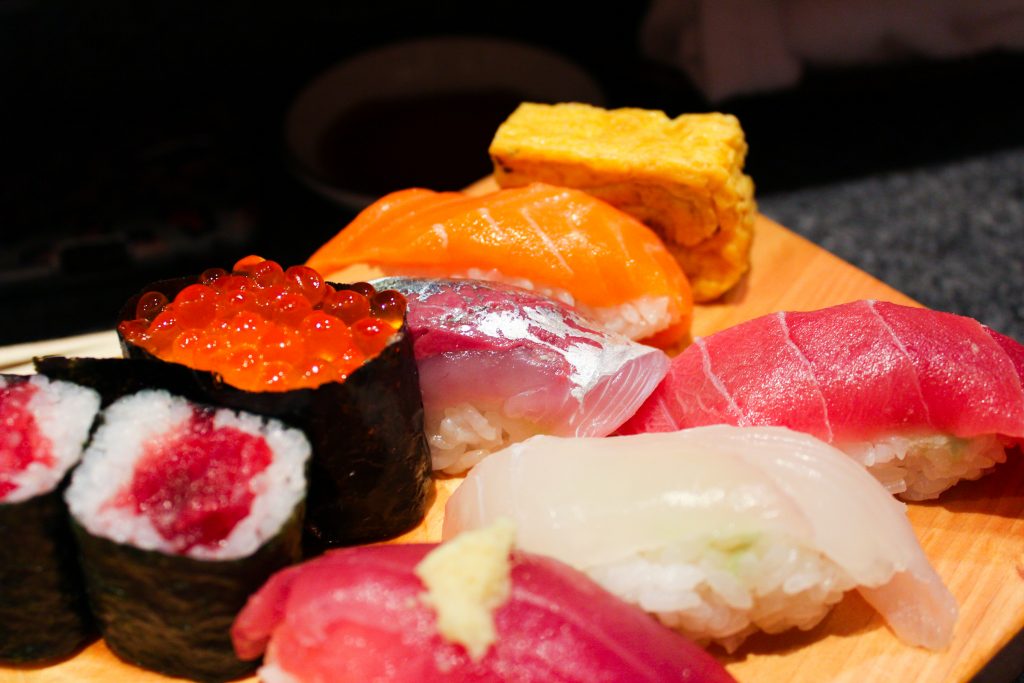 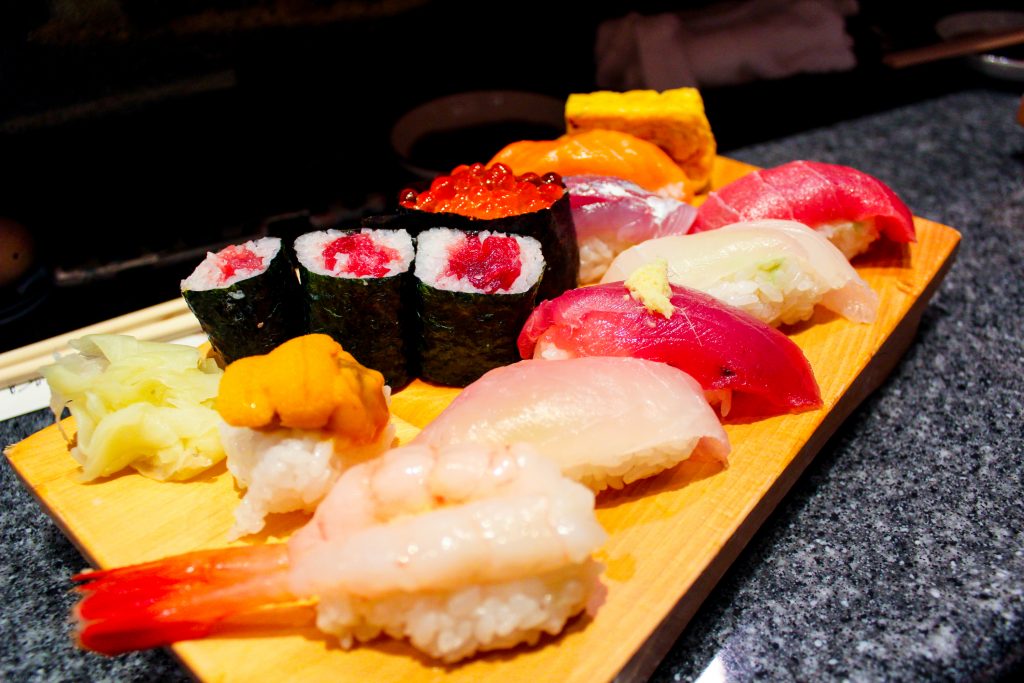 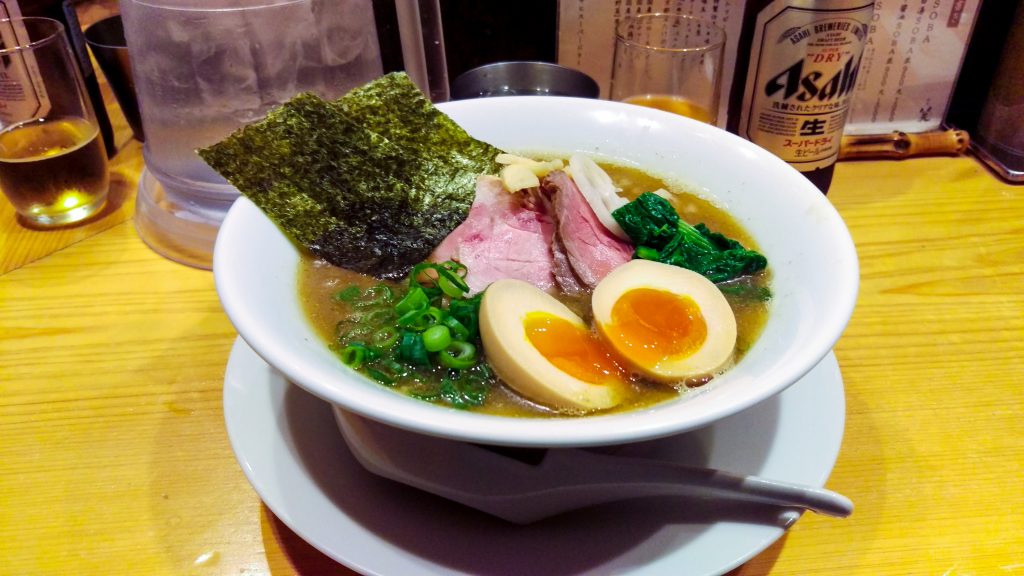 We also stop for Michelin Star soba served ramen-style at Kagari in Ginza without breaking the bank. The line was long due to there being only about 8 seats in the whole place, but the caliber of the noodles and umami in that stunning, heavy broth was damn-near soup nirvana.

Oh and Tokyo DisneySEA has nearly ruined me for all other Disney Parks—the place is definitely better than anything at Walt Disney World. (Separate Tokyo DisneySEA post to come!) Become a part of the Society of Explorers and Adventurers (the SEA in Tokyo DisneySEA) and explore every corner of seven ports of call including The Little Mermaid’s Atlantica and an incredible Jules Verne-inspired steam punk area dubbed the Mysterious Island.

There’s also such as a thing as food hunting (think scavenger-hunting but with food) across Tokyo DisneySEA. Disney Parks are geniuses at creating artificial scarcity through making specific snacks available at specific snack stands. Want a sweet potato torta that basically tastes like sweet potato pie in churro form? Wait over by the High Tide Treats snack stand on the ramp between Mysterious Island and Port Discovery. Craving a hot, flaky meat pastry? Stop by Breezeway Bites above Aquatopia.  Think you can plan your culinary escapades in advance to avoid the 1+ hour long snack stand lines? Think again. Some stands are not listed on the park map and if they are, the food descriptions don’t list exclusive menu items. Oh, and my husband and I made sure to try every new drink we could find. The Suntory Lychee and Salt Soda was by far my favorite. 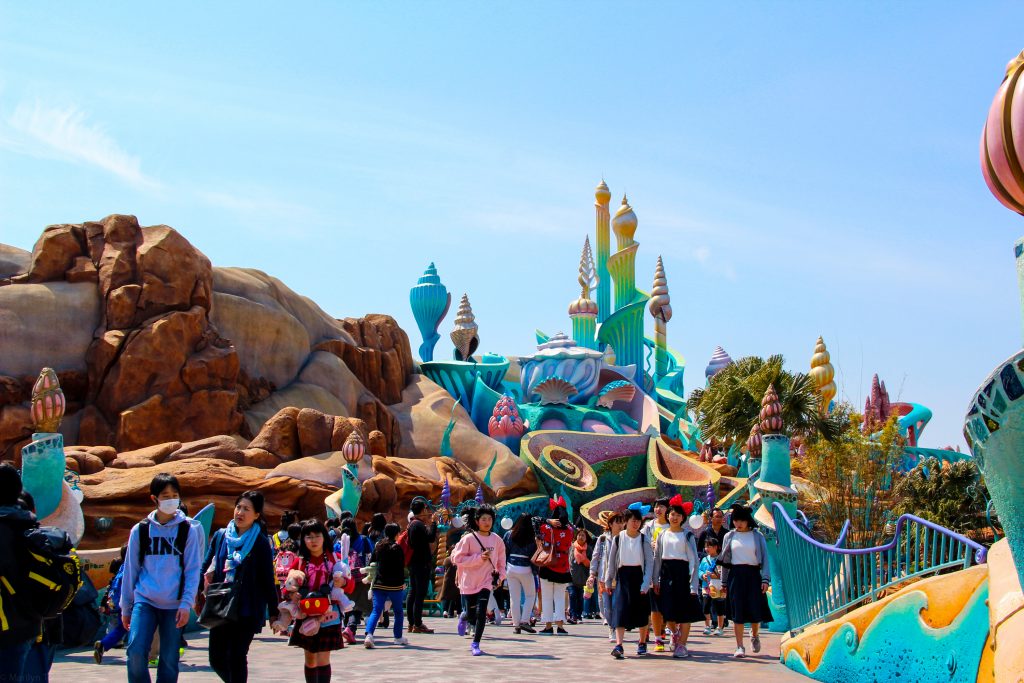 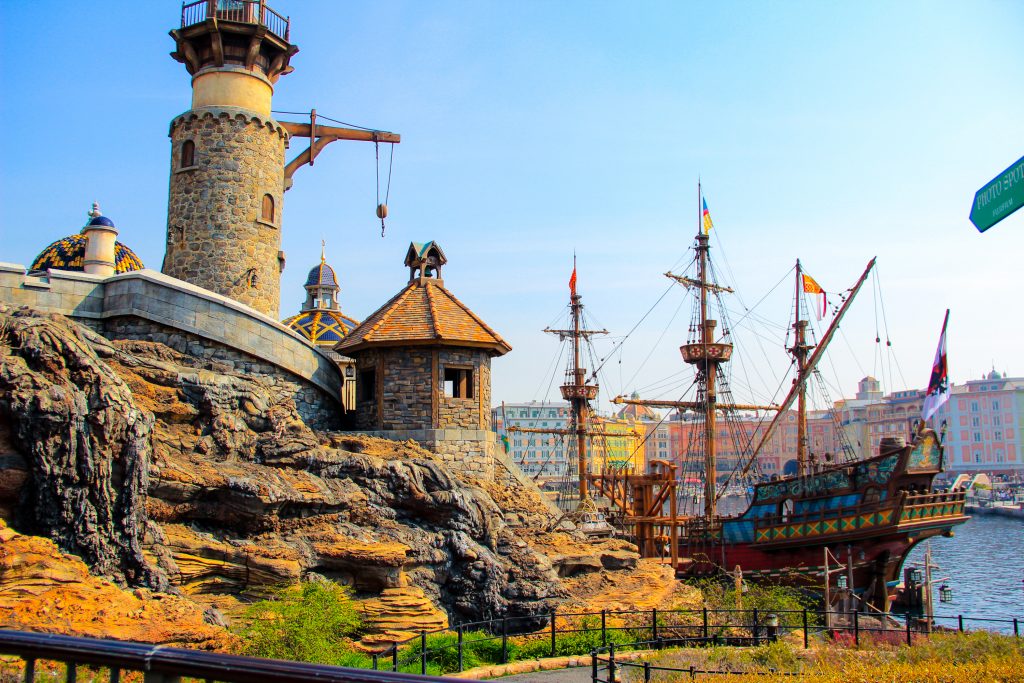 Bar High Five is one of the best cocktail experiences I’ve ever had. This place feels elegant and Old World but everyone is warm, welcoming, and ready to surprise us because there was no menu. Instead, our bartender took a few minutes to interview me about my personal tastes and write down my answers. Then, I sat back and watched the magic happen. My first cocktail was a refreshing sakura Japanese gin fizz creation and my second turned out to be an Old Ezra 7-year bourbon violet Suntory grape beverage. Mr. Forkful opened with a yuzu whiskey beverage, followed by a Bols Yoghurt vodka pinepple cocktail, and wrapped the night with a shiso liquer and rum cocktail.

Robot Restaurant is a glorious mish-mash of neon, chromed out robots, and thumping dance music. My husband and I saw the most Western tourists at this show, but we didn’t care. We were too busy practicing our first row safety routine (taught before the show) by leaning back to avoid head trauma from the ceiling-high parade floats packed with dozens of taiko drummers. We were entranced. 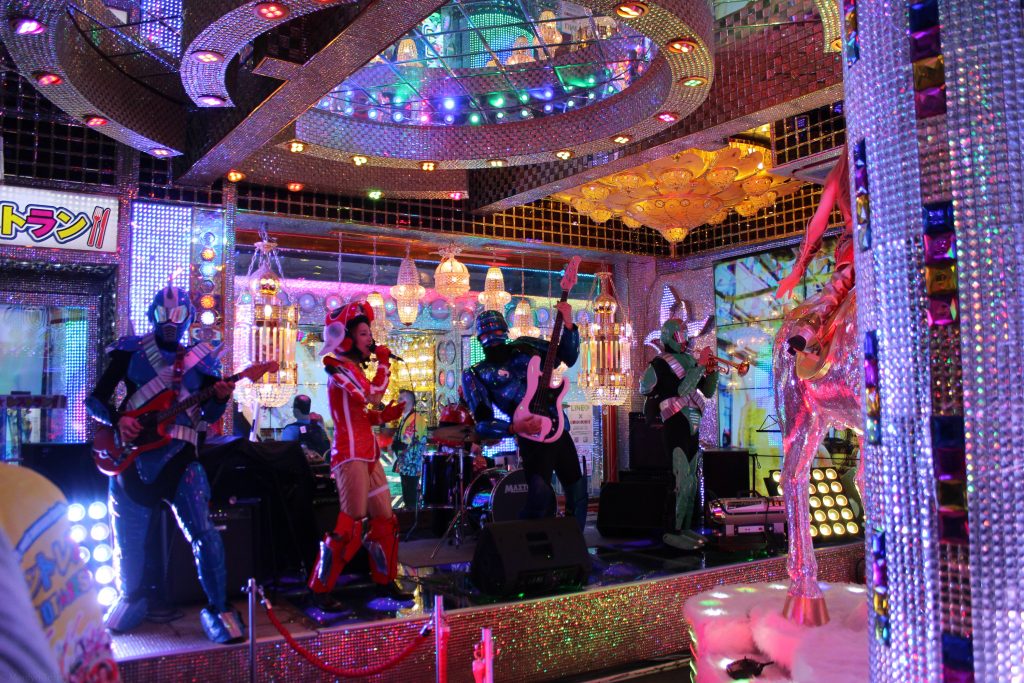 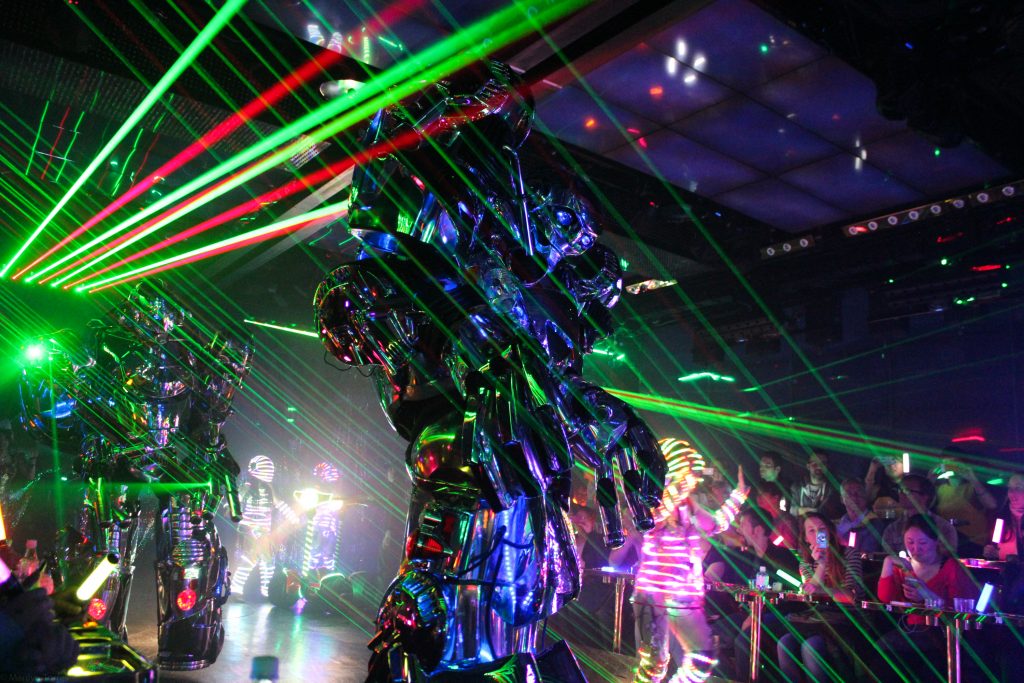 Protip: Order multiple beers before the show starts; the show is even more fun with a few adult beverages and refills are not allowed during the show because giant robots.

Against our better judgement, my husband and I went Roppongi club-hopping with the crew at Tokyo Pub Crawl. Apartment-style buildings contain dozens of tiny bars in a magnificent economical use of space. We booked a pub crawl tour with drinks and covers included so all we had to worry about was remembering to shuffle home before the subways shut down at midnight.

Tokyo is the epitome of a modern metropolis, but we didn’t forget to escape the skyscrapers and constant go-go-go of Central Tokyo. One of the most unique and unforgettable experiences I’ll always hold close to my heart is the Ghibli Musuem in Minato (get tickets in advance). The museum was designed by Hayao Miyazaki and seems to just organically grow out of the surrounding park. Photos aren’t permitted inside, but that was actually a blessing in disguise. The entire experience turned me into Alice stumbling through the looking glass if she had phased through several Miyazaki films all at once. 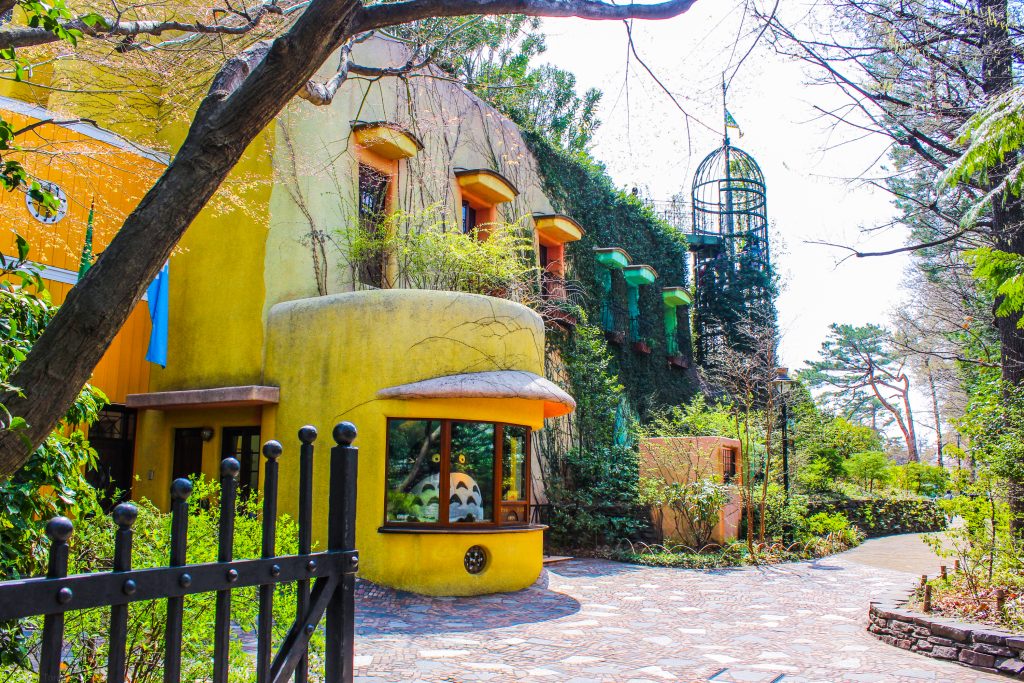 Shirohige’s Cream Puff Factory for the most adorable Totoro treats I inhaled during our whole trip in Setagaya. The cream puff shop can officially use the Totoro characters becuase the shop is owned by Hayao Miyazaki’s sister-in-law. Both the Ghibli Museum and Shirohige’s places were maybe 30-45 minutes by train, but filled our hearts with pure joy. 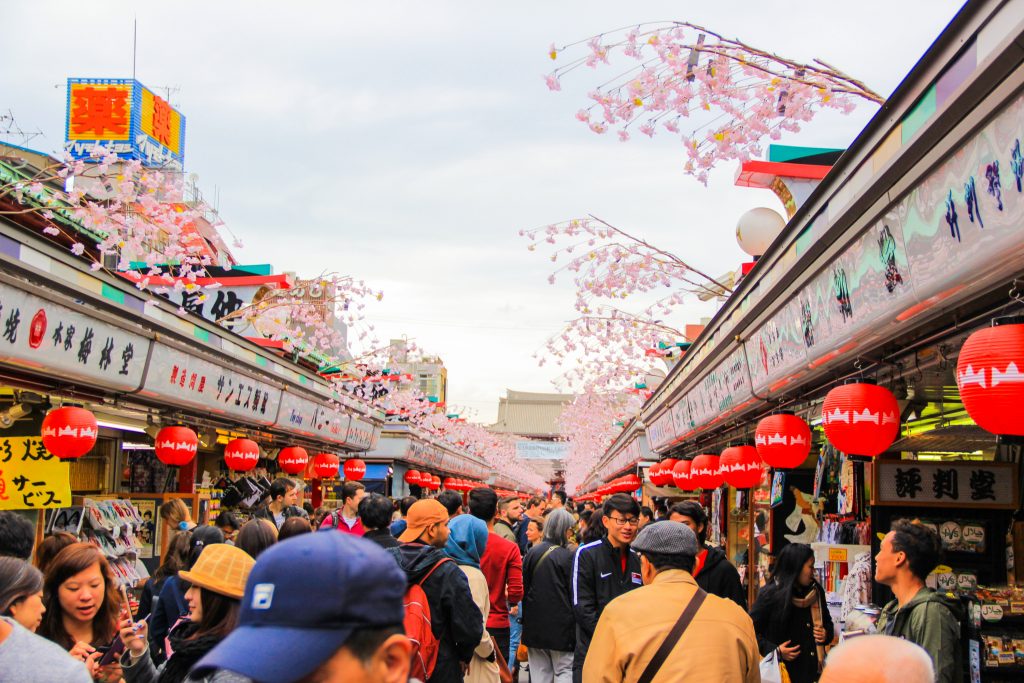 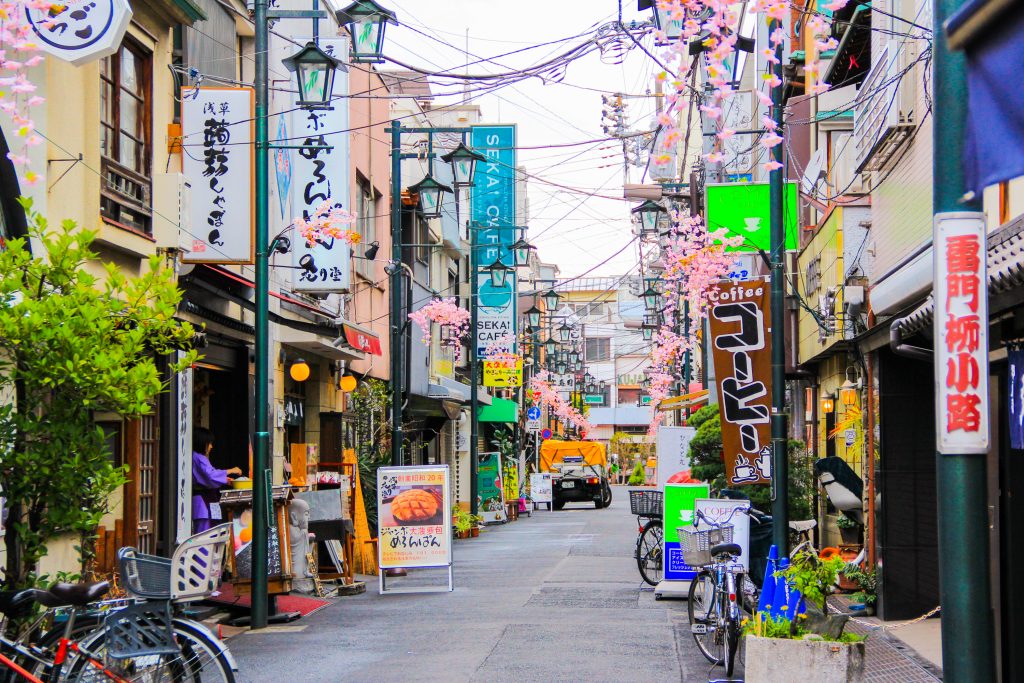 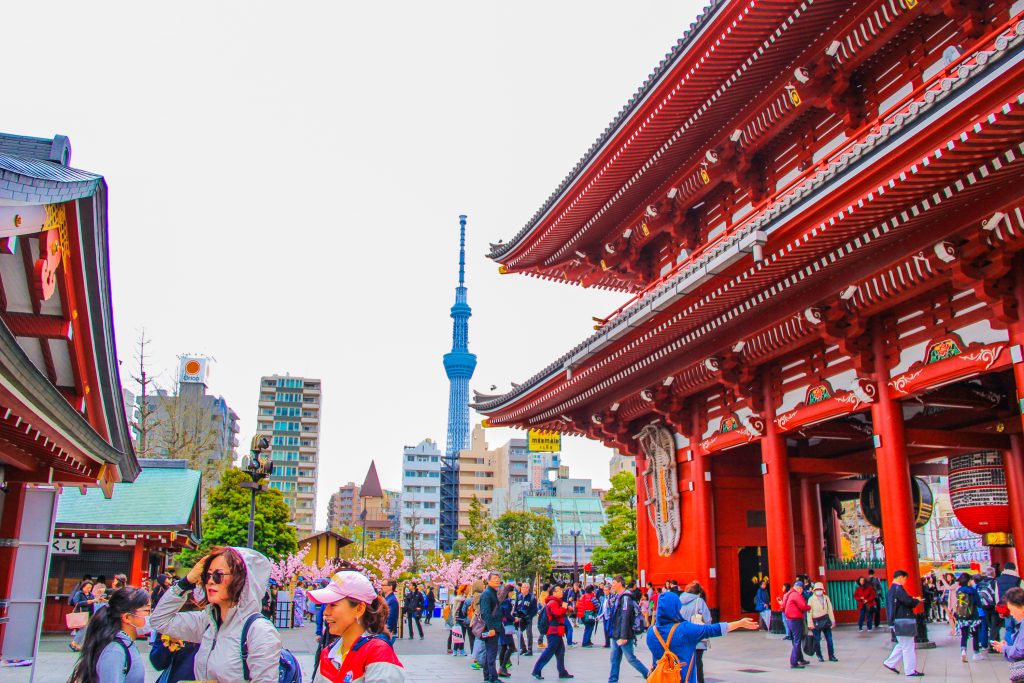 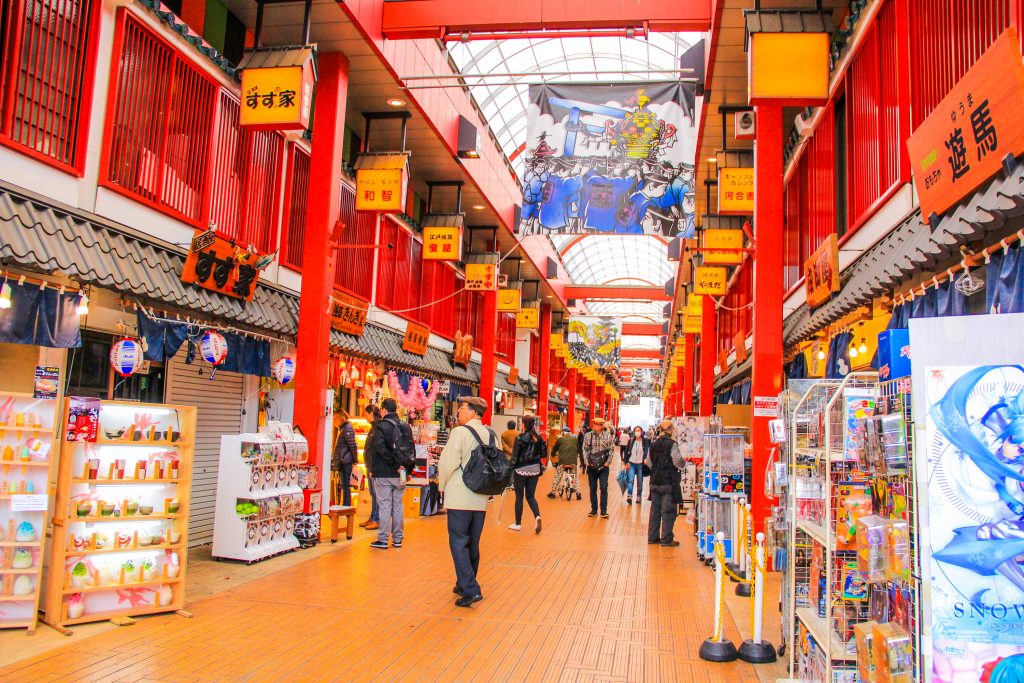 Uneno Park is home to Bentendo Temple (est. 17th century, rebuilt in 1958) and Gojoten Shrine (built in 1651, survived WWII), but an even better walk back in time was the younger Meiji Jingu Shrine inside Yoyogi Park in Shibuya. The tall forests in this park made the city all but disappear the deeper we wandered, Harajuku and the crammed Takeshita Street a distant echo.

The area was dedicated to the spirits of the 19th century’s Emporer Meiji and Empress Shoken. Their reign closed the chapter on fuedal Japan and ushered in a return to emporers and a more westernized style of life. Empress Shoken favored wearing western dresses over kimonos, engaged in charity work, and supported women’s education.

Mr. Forkful and I didn’t forget to leave a monetary offering and take home an o-mikuji (fortune) as a small momento. We tied good fortunes in the designated spots near the shrine to help them come true. People also tie a bad fortunes at the shrine so the fortunes won’t follow them around.

Go Home to Come Back

We tried to do every single thing anyone has ever said to do in Japan on our first trip even though that’s not possible. My husband and I visited only a precious six prefectures, from Kyoto to Tochigi, but there’s still so much more to experience. We packed every single day of our trips with sightseeing, hiking, and food but we also slowed down in onsens and stretched out under sakura blossoms. Hopefully, one day we’ll see Japan again. Until then, I’ll cherish our countless Japan escapades in my heart and dreams for decades to come.