Earlier this week, the second round of Whole Foods Market’s Fill the Grill challenge took place at Whole Foods on Turkey Lake Road. Chef Steve Saelg of The Crooked Spoon food truck and Chef Tuan Tran of CRAVE Restaurant near Mall at Millenia were pitted against each other, given $20 to shop for ingredients in 20 minutes, and 20 minutes to cook for three judges. I’ve never had the pleasure of eating at CRAVE, but I am very familiar with the dishes from The Crooked Spoon. The 4-20 Burger will always have a special place in my heart.

I settled on the sidelines with a sampler cold plate of pasta salad and string beans in a red sauce and a light French Pinot Noir. Christine of RandomHangers.com and her husband, Steve, were right there with me! Steve was also nice enough to use his height as an advantage and take a few photos bove people’s heads with my camera.

Both chefs lined up at the starting line and were in the check-out aisle far before their twenty-minute shopping excursion, and both chefs’ receipts totaled under $20. Chef Tuan’s total really stood out at $17 because he was even able to include a Vietnamese beer pairing and still come in under budget.

Once the chefs were back at their stations, they started prepping, speedily chopping, and marinating their meats and vegetables. The previous chefs chose seafood for their plates, probably mainly due to the limited time constraints. Chef Steve chose to grill chicken thighs with grilled avocado, orange halves, and couscous garnished with dill and what looked like a citrus reduction. Immediately, the fruity sweetness complimenting the savory just screamed grilled summer favorite. Chef Alec Cheak of Fleming’s Prime Steakhouse & Wine Bar won the first round of Fill the Grill with beautiful grilled Pacific Cod garnished with a mixed berry reduction, so already Chef Steve had a slight edge.

Chef Tuan went for grilled beef skewers, which were cut small enough so cooking time wouldn’t be an issue. The most interesting flair of the dish were vermicelli rice noodles, which Chef Tuan expertly grilled alongside the beef and vigorously stirred with chopsticks. Memories of the complications I ran into with handling such delicate noodles fueled my awe for Chef Tuan’s unique approach to vermicelli. The final beef skewer plates were garnished with grilled tomatoes and peppers in what looked like an olive oil-based sauce. The judges were also served a light beer pairing. Chef Tuan even poured a beer for Chef Steve to enjoy. 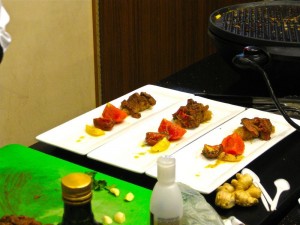