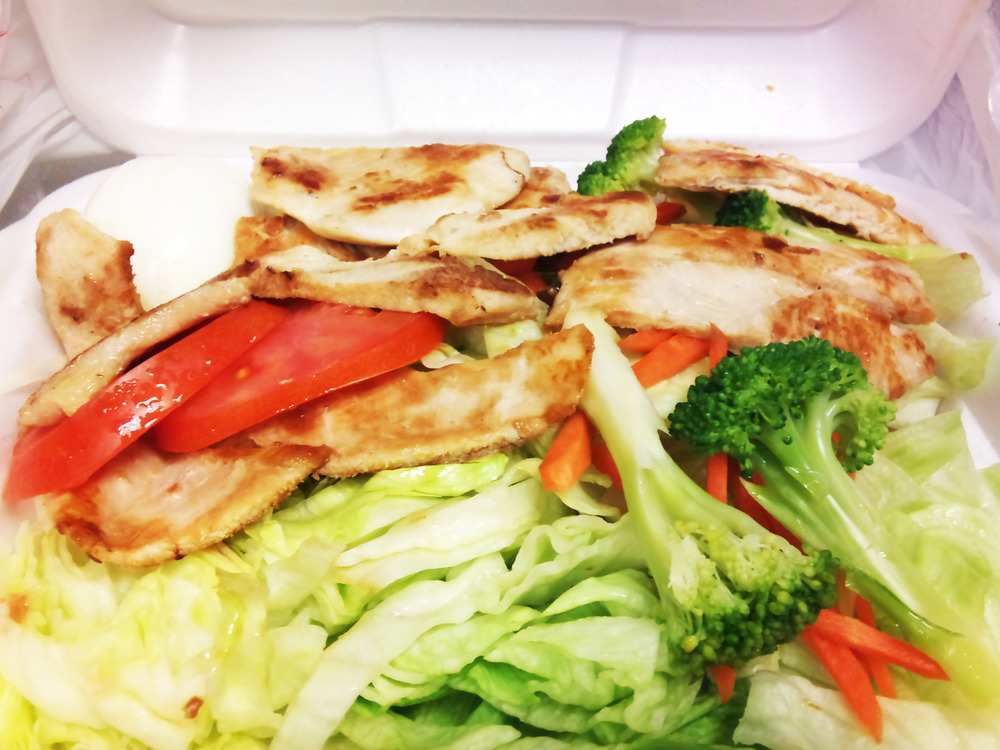 Eat Local Orlando mentioned there were food trucks mere minutes out of my way, so I had to take a quick lunch expedition! The Red Lot is located on the Kissimmee side of the Orlando International Airport. There was signage that pointed me in the right direction, and I found the Red Lot across from the Cell Lot. The Red Lot has been marked closed to regular traffic for a while now, and is mainly dedicated to commercial vehicles. (e.g. Taxis, Disney Buses, Rental SUVs, etc.) Lucky for me, no one seemed to mind I was there. I took a minute slowly circle around and find an unobtrusive parking spot on the far left of the lot. The last thing I wanted was to get in the way of the Magical Express!

The food trucks as of Wednesday, April 20, were limited to two vehicles. Both trucks were from the same company, Sunrise Catering. I was in the mood for something light, especially with the Food Truck Pod later that night, so I opted for the Lemon Chicken with salad. The order was ready in about eight to ten minutes with Italian dressing on the side, and I was on my way back to the office. There was no lemon flavor to the dish – the thin-cut chicken was divided into wide strips and evenly laid over the salad. The chicken was savory enough, and after a little Italian dressing drizzled everywhere, the rest of lunch was nice enough. The hard-boiled egg in the corner of my to-go box was a good touch.

Sunrise Catering is no-nonsense food and works in a pinch to staunch the rumbles. The prices are not bad either. There are a lot of signs that deter potential new customers who don’t drive commercial vehicles, and the food seems so-so. Don’t expect house-made sauces, and pre-packaged snacks take up a big space underneath the serving counter. Fresh sandwiches seem to dominate the menu, so I’ll head back to Sunrise for a quick sandwich and another review sometime soon.