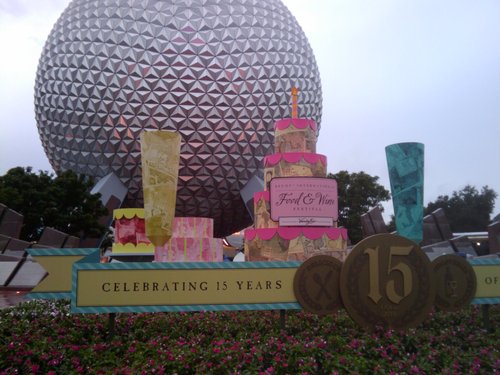 While Adam and I didn’t get to Food and Wine it up until after 6:30 p.m., we met up with Kathleen and Mike and made it from Puerto Rico to Ireland in record time! This was just the highlight tour, but I had an amazing time.

After a quick run to the Epcot pin trading station at the World ShowPlace — yay Annual Passholder exclusives! Country food kiosks started immediately before Mexico with Puerto Rico. I decided to pass on the asopado [rice, chicken, and vegetable stew] tonight, even though the line was as long as the Brewer’s Collection! But I’m still reeling from how much food and drink tasting we all did in such a short time.

South Korea has an interesting herbal soju that light on the flavor but packs a similar punch to Romana Sambuca. Plus, the short ribs with cucumber kimchi were tender and packed with flavor! The pork lettuce wrap doesn’t sound impressive, but it was also delicious.

Adam had already been to the Brewer’s Collection for a flight of three you-pick beers, so Kathleen and Mike joined us for another run to the Brewer’s Collection. This time we each got a beer flight. At $7 for three generous samples, the beer flight at the Brewer’s Collection is one of the best values at the festival. The Schofferhofer Weizen had an interesting, strong flavor but I wasn’t a fan. Adam and Kathleen dubbed the Weizen the “banana beer”. My top picks were the Altenmünster Dunkel and Altenmünster Märzen, which are both amber to dark in color but smooth and unique without any strange twists. After chatting up a couple who had no idea the festival started today, and a few couples that had already trekked around the world, our next stop was the Karamell-Kuche in Germany, and it was packed! So, we just walked by the caramel, chocolate, and even marshmallow-covered apples on our way around the World Showcase.

The American Pavilion had a so-so Cherry Wheat Sam Adams, a juicy lobster roll on a toasted, fresh-baked roll, and a toasty crab cake. I don’t like cherries, mind you, but the Sam Adams was still good. There was also a nice bison chili, which was genuinely good but nothing out of this world. The heirloom tomatoes were, if anything, a good palette cleanser. Oh, and the Red Stag Jim Beam Lemonade was more lemonade than whiskey.

Morocco’s beef pita was juicy and flavorful, but the falafel pita was dry and brittle. The Sangria was strong but still fruity! The Tangerine Mimosa, on the other hand, was sweet but surprisingly flat.

All the food portions tonight were a good value for the price, but according to Kathleen and Mike, there are a few kiosk offerings to avoid mainly because the portion size is less than normal tapas. Some of the top things on my list to try in the coming festival days are the fondue and basically everything at Puerto Rico, Hops and Barley, Ireland, Singapore, Italy, New Zealand, and South Africa. Talk about doing a Friday right!